Surgeon Simulator 2013 was created by Bossa Studios at the 2013 Global Game Jam in January. In just 48 hours they were able to develop a darkly humorous over-the-top operation sim game where the player takes on the role of Nigel Burke. Nigel Burke is a would be surgeon whose clumsy hand are responsible for the lives of his patients. Surgeon Simulator 2013 can be purchased through Steam and can be played on PC. There is a Surgeon Simulator 2013 Jam Prototype in which it is essentially the demo version of the full game, which can be downloaded through the main website.

Surgeon Simulator 2013 is an over-the-top simulator in which the player controls a bumbling hand in order to perform rigorous task of complex surgeries such as open heart surgery. The player will be given a task of removing organs and bones with the provided surgical tools in order to help "save" the patient. At the same time the player must not allow the patient blood level to drop below zero as well as trying to keep the time score as low as possible.

Surgeon Simulator 2013 does not have very many goals to achieve except for keeping the patient alive by keeping his blood level high and successfully completing the surgery. In the Surgeon Simulator 2013 Jam Prototype the player goal is to perform heart surgery. There is no instructions as to how to complete the heart surgery but one thing is sure, once you remove the old heart and place the new heart in its place the surgery is complete. You do not have to attach any arteries or have to replace any organs or bones you remove during the process. The process in which one goes through in order to perform open heart surgery is up to the player. In some examples, the player may use the hammer to smash open the rib-cage or they can grab the saw to cut threw the rib-cage. Either way, the player may experience different results that could either be helpful or damaging to the patient their trying to save. For instance, if the player decides to use the hammer he may be able to break open the rib-cage faster but then the bones will be scatter about and the possibility of damaging the organs as well. On the other hand the player may choose to use the saw try to cut through the desire bone but risk the chance of hitting the patient open body thus reducing his blood level. Essentially this game is an open-world sandbox where the player has multiple tools and must decide what is the best course of action to take. 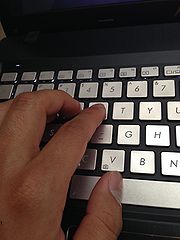 The player will utilize both the keyboard and mouse to control the one hand that represents Nigel Burke. On the keyboard the player will control the fingers by using A, W, E, R, and Space keys to control each finger. The layout of the finger controls appear to be design to cater to the comfort of each finger, where A is the little finger, W is the ring finger, E is the middle finger, R is the index finger and space is the thumb. The mouse controls the movement of the hand while the left and right buttons control motion of the hand. The left button controls the rise or descend of the hand, in default the hand hovers over the patient and tools, by holding down on the left button the hand will slowly descend where it is currently hovering over. The right button turns the hand, by holding down on the right button and moving the mouse left or right, the hand will twist in those directions. You can go from palm up to palm down and vice versa. Another essential movement with the right button is moving the mouse forward and backwards while holding the right button. This causes the hand to bend at the wrist which allows the player have more access into certain areas.

There is no difficulty setting for Surgeon Simulator 2013, but the challenge of the controls and the setting makes the game difficult. Minor bug issues in the game makes it difficult to control, such as collision detection or grasping of materials. In the Surgeon Simulator 2013 Jam Prototype, some of the more noticeable bugs is the cloth that is covering the open section of the body, when the hand is place on the cloth and try to be remove the cloth does not "attach" to the hand. In some instances the hand goes through the cloth and becomes stuck until the you maneuver about to remove the cloth. Issues such as grabbing makes it difficult as well. When pressing down on all keys not all of the fingers will close which makes it harder for you to keep the item in hand. Though this is the prototype version of the game so final game may differ.

Surgeon Simulator 2013 would not be ideal for teaching surgeons how to perform life or death surgeries, but it can be use as a basic teaching aid for those who are interested in the medical field. This can be used to teach students the basics in procedures such as removing certain bones and maneuver about to reach the heart without completely emptying the body cavity. It can also be use to show the difficulty it can be to carefully remove internal organs and not damage the patient from within. This can show students that minimizing time and blood loss could result in better outcome for the patient.

On the other hand this game can be use to identify the faults and misconception of critical surgeries. For instance, can you perform surgery without removing any of the bones or organs. Or can the patient really be alive if you remove certain organ from them, if so what is that keeps them alive.

Another thing that is worth mentioning is the difficulty and patient require to play this game, it can teach students to be careful and try not risk a lot of damage all while trying to keep the time and blood loss low. For a student who wishes to become a surgeon, being patient and understanding the risk one has to take in order to save a life can be a crucial moment during any real surgery.