The series of Microsoft Simulator games was created by ACES Studio. The first version was called Flight Simulator 98, created in 1998. There have been four different versions culminating with the latest version, Microsoft Flight Simulator X (FSX), created in 2010. FSX was designed for the personal computer platform. Online support for the multi-player version was recently terminated when the ACES studio was closed by Microsoft. Now, if you want to play online and enter the virtual aviation world, you have to use FSinn connected to the VATSIM network (Virtual Air Traffic Simulation).

The premise of FSX is to gain basic experience flying aircraft, ranging from ultralights to heavy jets. You begin by completing several beginner-level challenges to familiarize yourself with take-offs, maneuvering, and landings. As you complete challenges you are rewarded with a series of wings to acknowledge your accomplishments. You also earn rewards for flying certain difficult missions, like landing in Telluride, CO. 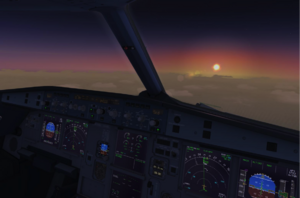 A screenshot from inside the aircraft, showing how realistic the control panel can appear.

The systems that make up the FSX game are the controls and navigation systems that would be seen in a real aircraft. You can interact with these controls either by using a flight yoke and instrument panel, or by designated buttons on the keyboard. During training sessions, you would also include obstacles that you must navigate through as a system. The mechanics of the game include all of the rules of flight. You have to obey the laws of physics in order to stay in the air, and you must take off, navigate, and land correctly in order to successfully complete a challenge.

As a player of FSX, you begin by learning how to take off and land in a simple ultralight aircraft. You have an audio coach who gives instructions through the computer speakers or head-set. This interface lets you know the steps necessary to successfully complete each task in a challenge, and lets you know if you deviate from the correct steps of flight. Once you complete the first challenge of taking off, progressing through three gates in the sky, and landing, you proceed to navigation for different altitudes, and then begin to practice turns in the next challenge. In FSX you can use any aircraft available through the software, but this is not the case for the virtual airlines associated with FSX. You can also fly into any airport you like, but you can earn your way into endorsements for more difficult airports. 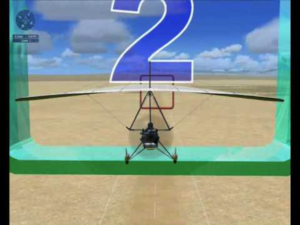 An example of one of the air gates you must successfully navigate through.

This simulator is so realistic that the game itself looks like you are sitting inside the cockpit of the aircraft you are flying. You have different views available, including a birds-eye-view of the aircraft and inside the aircraft. You can adjust the zoom in and out of the cabin, and based on the quality of the scenery, and possible add-ons, you can see amazing detail of the terrain that the aircraft is flying over.

As mentioned previously, you interact with the game through either the designated keys on the keyboard or by using a flight control and yoke that can be purchased separately from the software. The flight controls greatly increase the realistic feeling of the simulator. The dials and levers you see on the display screen of the aircraft give you readings for altitude, speed, and a variety of other important details that I have not yet mastered.

Because the FSX is a simulator for flight, the rules are very basic; fly correctly and you are fine, fly poorly and you will crash. The rules make sense for the product, but there is some inherent frustration in learning how to control flight if you have only experienced driving a car or similar types of navigation. Flying a plane is greatly different, and it can take a great deal of patience and persistence to pass the first few challenges. The rules make sense, you just have to learn and understand why the rules work.

FSX is used to learn the basics of piloting aircraft. There are training facilities and privately constructed simulator set-ups that look very similar to the inside of specified aircraft. These simulators are used to safely train rules of flight before pilots use actual aircraft. This is a great system for individuals deciding if they want to pursue a pilot’s license, and for those interested in training to become certified for a certain type of aircraft.

A custom-painted Virgin America Airline aircraft within the game. The detail of the airplane and background airport lends a feeling of reality to the simulation.

Microsoft has decided to discontinue production of future Flight Simulator titles and this has greatly frustrated the many, many users of this product. The world of virtual airlines and flights is gaining in popularity all the time, with complete set-ups including the virtual running of real airlines, and has provided a networking space for individuals interested in becoming pilots, as well as pilots who like to fly to a wider range of destinations, using a wider variety of aircraft than their job might allow. The interaction between this set of people sharing a common interest allows for connections to be made by future employers and future pilots. Microsoft Flight Simulator X is the foundation of this virtual world meshing with real-world aviation.