Kerbal Space Program is a sandbox-simulation game made by Squad. In this game, players take charge of the budding Kerbal Space Program, building rockets and manning interplanetary missions. Players try to explore the final frontier using engineering prowess, sheer luck, and catastrophic failure. The ultimate goal is up to the player’s imagination, but you can be sure there will be both successes and failures along the way (mostly failures). The game is available on Windows, Mac, and Linux, and it is currently in beta with updates coming regularly. Note the version I am reviewing is version 0.23.

When the player starts off the game there are two modes to choose from Sandbox and Career. Career mode starts the player out with the bare minimum parts and can unlock more by performing research. Sandbox however gives the player access to the entire parts library and allows them to do anything they want. Regardless of which mode is chosen, the first thing players will do is construct a rocket.

Construction is one of the key components of Kerbal Space Program. Players will need to construct the appropriate rocket in order to carry out whatever their mission is in the game. Now there are a variety of part types the player can attach to their rocket. These types vary from capsules, propulsion, aerodynamics, structural, research, as well as other things. The design interface is quite simple with a drag and drop, snap on parts and symmetry tools making things very easy. The result is a system that allows for quick iteration. One other thing the game supports is staging. Staging allows for the rocket to jettison parts as they are used up. This is very reminiscent of the old Saturn-V rockets. Players can set up the staging using the staging tool on the right of the screen 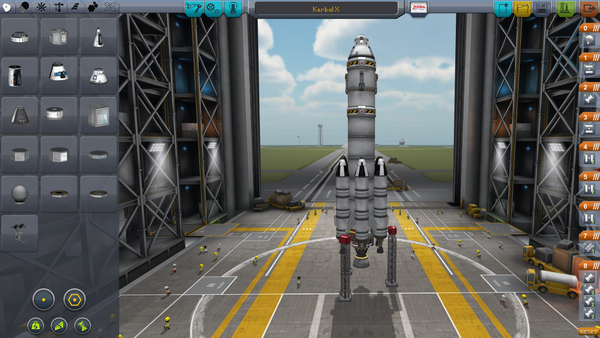 Once the player has their rocket designed, they can try to fly it. This composes the other half of the game. Players are about to “fly” their designs and perform missions (or fail spectacularly). The interface shows things that are important to flying the rocket. The first and foremost thing to see is the Nav-ball. This is important for navigation as it shows where the player’s rocket is pointed in relation to the planet as well as where their velocity vector is in relation to them. To the left of the Nav-ball is the throttle control and to the right is a G-meter. On top of the Nav-ball is the velocity meter which will show either surface velocity or orbital velocity. There is also an altimeter on the top of the screen which shows the altitude in relation to the body the player is orbiting. Players control their rocket using the keyboard controls to control throttle and steering. 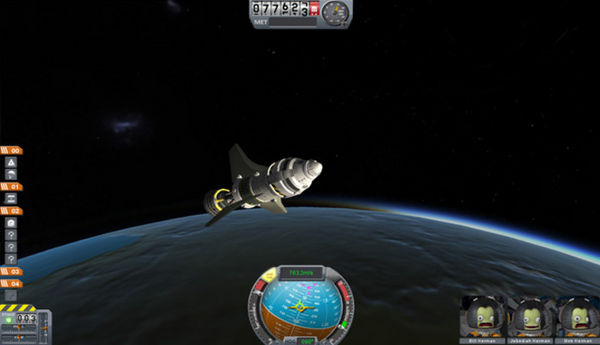 There is also a map screen players can access which shows what the orbital path of the rocket is as well as other bits of information useful for performing maneuvers. One thing player can do in the map screen is set up maneuver nodes which are like road directions for their rocket. When the player places a node, they can set up course changes and see where their changes will put them. This is crucial in setting up missions to other planets. Once the node is set, the game will give the player a countdown to burn, how long to burn, and which direction to burn. 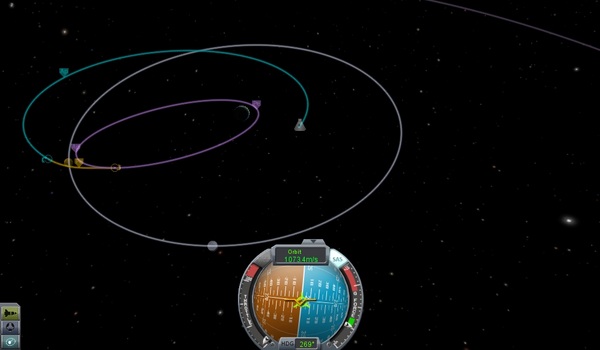 This is often the section that players will begin to have troubles with the game. There is quite a lot of information thrown at them and they are expected to pick it up very quickly. There are many times where the player will spectacular fail (often hilarious) due to some small design flaw or a lack of piloting experience. But honestly that is part of the learning experience. In my experience I learned more through the failures of my play than by reading things on a wiki. That said the game could use some better tutorials on how to fly rockets and perform maneuvers in space.

Once a player has a handle on their skills, there is quite of advance stuff they can take advantage of. There is an accurate physics system in the game, and many of the mechanics the game has are things that are used in real rocket science (i.e. aero-braking).

With all the mechanics in the game, there is a lot of potential to teach people a bit about the science that goes on behind space travel. I personally see this game as a teaching tool for middle school and high school students to teach them about physics involved in space travel. They could learn many things such as escape velocity, gravitational force, and force in general. I don’t know of anyone who has used this but I do know that NASA has taken a great interest in the development of this game.