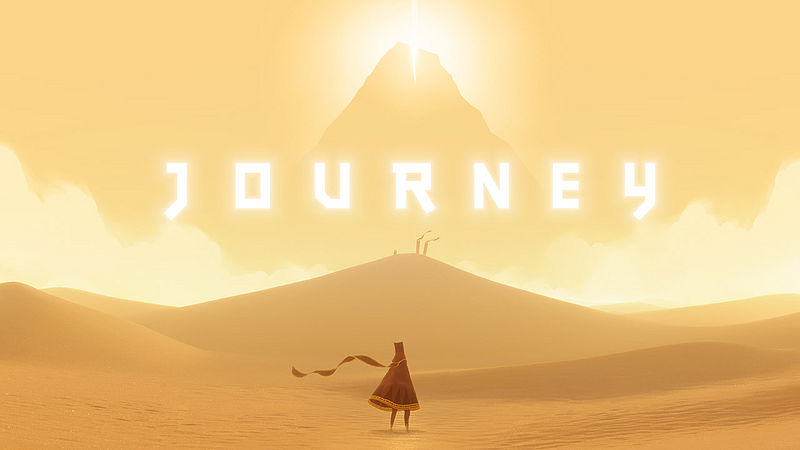 When I was given the assignment of reviewing only one game, I had the pleasure and the privilege of reviewing Journey by thatgamecompany. Journey is a gorgeous and amazing action adventure platformer published by Sony Entertainment of America. The premise of the game is to experience a journey from the middle of the desert to the top of a nearby mountain. Along the way, the plot unfolds in front of you by periodic "story breaks” where no words are ever spoken.

Journey is an interactive console game based around the premise of experiencing a journey from beginning to end. The game does not have a specific target audience it is an experience for all ages. The intention of the game is to exemplify that idea that every path is unique and sometimes the point is not about the destination, but the journey to reach that destination. Successfully reaching the mountain top reincarnates the player back to the beginning of the game. There are no points, extra lives, weapons, or alternate objections to the game. The player is given only the ability to jump (which is dependent on the amount of Scarf power) and speak (which can be charged for a larger radius). The player can encounter other players also on the same journey and choose to work along with them. Interface The graphics for this game are the true highlight of the game. The vistas and backgrounds use vibrant colors to illustrate the beauty of the architecture. This leaves an everlasting impression on the unique areas that the player visits such as a desert, subterranean levels, the base of a mountain during a blizzard, and the mountain top. The interface on the screen is minimalistic and much of the information about where the player is, going, and points of interest is left up to the player. The game will occasionally display important information if the player idles for too long. For the large majority of the game however, the player is given little instruction as to ensure that exploration is a major theme for the experience.

The interface is extremely efficient even though little-to-no information is given as there are very few areas the player can hurt or hinder themselves, and is very straightforward in which direction the player needs to go. The player will encounter other “creatures" that will either aid or hinder their progress, and objects that pertain to puzzles in the environments such as tapestry to make a bridge. The Player controls their avatar through the use of the face buttons (specifically x and circle buttons) and controls the camera in a 3d space by either using SixAxis control or the right analog stick.

Gameplay The gameplay for Journey is extremely straightforward. The player undergoes a journey from a desert far away from where a light is visible at the nearest mountain top. The player takes the role of a robed figure in a desert. After a brief introduction in which the player is taught about the 2 mechanics through use of pictures (jumping and a wordless "shout”), the game no longer displays text information beyond the Title Screen and the credits. The Player is equipped with a scarf that, when charged by red "tapestry" objects, is given the ability to make leaps at the cost of however much charge the scarf has. As the game progresses and the player explores and finds glowing objects and orbs, the scarf grows longer and the ability to jump becomes increasingly more powerful while the duration increases until the player is practically flying every leap. The player encounters much larger versions of the "tapestry" that allow the player to access different portions of levels. The player also encounters large hostile creatures that will rip apart the scarf if they spot the player. Players may encounter other players along the same journey. Two players can help charge each other’s scarves and non-verbally collaborate to solve puzzles and find orbs to enhance their scarves. Players, however, cannot communicate in any other form (via text or voice) and can only use the non-verbal "shout" which plays a musical note to communicate. When two players finish the same section at the same time, they continue on to further sections together. However, if they choose to separate, they may part and encounter other players. All players during this adventure are anonymous until the end of the game in which the credits reveal who accompanied the player along the way. Education This game, while both fun and somewhat challenging, is a perfect candidate for educational purposes. Journey showcases three fundamental aspects of both playing while learning: patience, perseverance, and cooperation. Patience: Journey is a self-paced game that exemplifies the quote by Ralph Waldo Emerson "Life is a journey, not a destination". Journey encourages exploration and discovery. Finding meaning in the game is a lesson in self-teaching. While some players may race toward the finish line, the beauty in the game is the soaking and absorbing the ambiance of the beautiful environments. Perseverance: Journey’s puzzles are not always straightforward. When the player begins the game, they are told very little information about where they are going, who they are, or what their purpose is. It is only through trial and error that the player learns the strengths and limitations of the game. Another aspect of perseverance that is taught by Journey is the puzzle solving. Many of the puzzles throughout the game give no indication as to what needs to be solved in order to continue. The answer may be as simple as using the "shout" command on a nearby wall to as complex as releasing "tapestry" objects and using their recharging power to fly over a nearby wall. The puzzles are fairly simple once the answer is known, but finding the solution is its own challenge. Lastly, perseverance pays off by exploring the environment to collect orbs. Each orb is completely optional to obtain throughout the course of the journey. It is to the players benefit to collect more (in turn having more leaping ability). Not every orb is in plain sight and takes some exploration as well as trial and error to reach. Cooperation: Journey is a shining example of collective cooperation. Given the limitation that each player is imposed with communication, being only able to see and shout near others, players are given no speech or textual communication whatsoever. Only after the game is over will the players be revealed to each other. While this may seem to work against the idea of cooperation, the beauty of Journey is that this enhances cooperation. Since there is no competition for items or collectibles working together does not hamper or harm the players in any form. Each player can choose to work, or not to work, with others during the course of "their" experience. All the objectives can be completed alone if the player so chooses. But if the player decides to work with others, all the objectives become easier (either through splitting up and exploring certain regions, or through guiding to hidden areas if players have completed the game before). Also, players may charge other players scarves enabling more opportunity to jump. If a player chooses to work solo, their scarf may deplete much faster than if they worked alone.

Adaptation to classroom I could imagine this game being useful in a classroom setting with some modification. While the intentions of the game developers was to maintain anonymity throughout the experience while online, if this were to be used in a classroom setting it would have to be with some form of LAN setup. This could be helpful in a “team building” sort of exercise to instill cooperation among the students. Another educational purpose for the game is analytical problem solving. Journey would be helpful in helping to showcase practical problem solving in a classroom environment “We only have 2 abilities, jump and shout. How do we overcome this obstacle?). Lastly, the artistic vision of the game could be useful in showcasing students that not every video game is objective based. The exploration of the environment is as much a game as the plot is. Overall Rating:

Overall, this game deserves an A+ in my book. It is extremely artistically and graphically beautiful. The philosophy and the implementation of the game result in a fascinating experience, one that I believe everyone should experience. It embodies the idea that “Life is a Journey, not a destination” and showcases this, without the use of a single text or any speech. It encourages exploration, perseverance, and cooperation in each player. Ultimately, once the game is completed, it starts the player at the beginning, coercing another play through.

All images taken from Kotaku.com http://kotaku.com/journey

Click on a date/time to view the file as it appeared at that time.

The following page links to this file: