Enviro-Bear 2000 was created by Justin Smith, with music by Roberto Ricioppo. It can be played for free on the PC, but also has a mobile version called Enviro-bear 2010 for $0.99.

The game has no official given genre, but I would say it is an Action Survival Simulator. In short, the game is played from the perspective of a bear attempting to eat large quantities of food. An additional twist is that the bear is driving a car, and proper operation of the bear's vehicle is vital to survival in the game. The theme and goal is that of survival; when enough food is consumed, your goal is to get to a cave (which is conveniently shaped and sized like a tunnel for cars) and hibernate. Play continues in this fashion; the bear wakes up and gathers food for the next year, and once again, seeks shelter to hibernate. 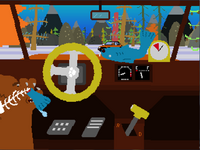 Eating fish is a great way to fill up before hibernating in Enviro-Bear 2000. Be careful, though, as they can still move around and disrupt other parts of the vehicle and inhibit your ability to drive. In the distance, another bear and his respective motor vehicle can be seen. 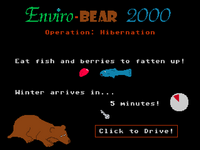 The starting screen for Enviro-Bear 2000. Turn the ignition!

All interaction with the interface elements is done with the mouse. Your mouse cursor is represented as the bear's paw extending from the bottom of the screen. A left click will grab with the paw. Actions that, in other games, may be done with keyboard presses or by selecting options from a menu are done exclusively by physically pulling, pushing, grabbing, or moving something with the bear's paw. To go forward in your vehicle, for example, you must pull on the gas pedal with your bear's paw. To eat food, grab it with the paw and place it near the bear's mouth. By removing these levels of abstraction that are often taken for granted in other games, Enviro-Bear 2000 presents the player with a very unique gaming experience.

To move, you interact with the four main apparatuses that are present in the car: the gas moves forward, the brake stops, the steering wheel turns your vehicle, while shifting gears between drive and reverse while stopped will make the gas pedal move you either forward or backward depending on what gear you're in. It works much like a regular automobile, though there is a degree of abstraction to its controls compared to reality (though not as abstracted as many other games which incorporate driving). 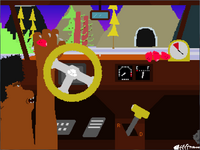 Another way to interact with the game world is by hitting things with your car. There are various objects in the game world, and they all produce unique results when hit with your car with sufficient force. Hitting boulders causes small rocks to fall in through the top of the screen. These rocks (and any other physical object that falls into the car) will disrupt the various parts of the vehicle; they may hit the steering wheel and cause you to swerve unexpectedly, or fall onto the gas pedal and cause you to lunge forward, often resulting in hitting another object and causing more objects to enter the car. One can remove these objects by throwing them off the left, right, or top parts of the screen (a representation of throwing them out the car's left or right windows or sunroof, respectively). 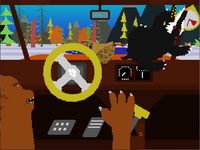 Some objects that fall into the car are more detrimental than others. A badger will not only jump around, making it hard to grab and remove while also ensuring optimal disruption of the vehicle's functioning, but will also eat any food it comes by at an astonishing rate.

Running over lakes with hopping fish in them will cause fish to fall into the car. The consumption of these fish is vital to the ultimate goal of surviving the winter. However, the fish and their bones will disrupt the car's operation like any physical object present in the vehicle, so it is wise to remove them once they are consumed.

Do it all again!

Play continues in this manner (to my knowledge) infinitely. However, the circumstances in which the bear finds himself are slightly more challenging every time. There is always a time limit within which the bear must find food and subsequently shelter. Also, every winter, there are random circumstances that make the game more difficult: such happenings include an early freeze, resulting in the ground being icy and slippery and therefore more difficult upon which to control a vehicle, as well as the lakes being over-fished, resulting in needing to feed entirely on berries.

The game has an overall very cartoony feel to it. The visual assets are very simple and clearly two-dimensional in nature. Solid colors are used to fill a lot of the space representing an object in the game, with a few hand-drawn lines of darker or lighter shades used to grant a greater sense of depth and form. For example, the bear's fur is drawn as a single solid shade of brown, with a few lines of a darker shade of brown representing the corners of the bear's mouth and ears. The bear's paw extends comically from the bottom of the screen, stretched out in a manner that no anatomically-correct bear could ever hope to achieve. The "nom-nom" sound of the bear eating food alongside fish flapping with both an over-exaggerated sound and an exasperated look on the fish's face likewise contribute to the game's silly appearance. Accompanying these very simplistic graphics and sounds is a very happy-go-lucky string-instrument soundtrack. 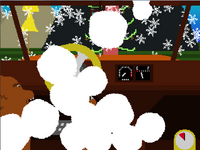 Snow fills the car suddenly when the clock runs out. The rest is left to the player's imagination as the screen turns white and "Game Over" appears.

Despite the very simplistic appearance of the game, there is much that can be learned from Enviro-Bear 2000. Many of the elements of the game, when taken together, can provide a very grimly realistic insight into the struggles of the bear seeking food and shelter for the winter. From a scientific standpoint this, to a limited degree, can be used to teach about the nature of ecosystems. It can be said that the game gets fairly difficult as winters pass. The penalty for failure to achieve the aforementioned goals of food and shelter are, for the player, having to start all over from Year 1, and, presumably, for the bear, death (either by starvation or being frozen). The combination of harsh obstacles, including the successful navigation of the interface itself, give the player a firm lesson in time management.

Perhaps the comical nature of the game at a glance can also be used as a learning tool. After all, a documentary about bears or temperate forests or something of the like can be said to be "boring", but Enviro-Bear 2000 contains some of the very simple lessons such documentaries may teach while simultaneously being a fun game with a very simple interface (it can be said that the game is 'easy to learn but hard to master') alongside very simplistic and silly visuals. Perhaps young children can be taught the harsh lessons of an animal's attempt at survival in nature while also enjoying the simplicities of the game.