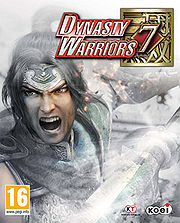 Dynasty Warriors 7 is a hack and slash video game produced by Koei Co available for the PS3, Xbox 360, and PC in Japan. The game takes the player through various eras and perspectives of important figures in the Chinese historical novel, “Romance of the Three Kingdoms.” In the story mode, the player gets to choose and play through one of the big factions of the warring states period which are: Wei, Shu, Wu, and later chronologically, Jin. Dynasty Warriors 7 in particular over the other Warriors games puts an emphasis on historical accuracy (with gratuitous embellishment) so the player fights through battles that their respective factions wins’ and hears about the ones they lose with each story mode ending when each faction ultimately falls apart in history.

Once starting the game, the player chooses one of over 60(!) playable characters that are either real or mythological Chinese figures. Following video game tradition, the game includes many sexualized female characters that have not participated in battle, but remain important historical figures nevertheless, and offer much to teach the player about the myriad of relationships in Chinese history. Players control their characters in a top-down fashion and the user interface includes:

File:Dynasty Warriors 7 UI Example.jpg The mini-map was turned off for cinematic effect in this picture.

The core gameplay of the Dynasty Warriors franchise still remains strong in its seventh iteration. It is perhaps the epitome of the hack-and-slash genre and one of the oldest modern 3-dimensional models as well. Players controlling the Chinese warlords slaughter, literally, thousands of enemy peons and officers throughout the course of one battle essentially single-handedly decimate the enemy army using a simple array of up around ten or more attack combinations using variations of light and charge attacks. However, the gameplay is not simple mindless slaughter as each battlefield is dynamic and there are always mini objectives such as ambushing an enemy general, escorting supplies, and freeing captured allies just to name a few to keep each fight interesting. Still, even with all the side-objectives, the gameplay in the Dynasty Warriors series is a double-edged sword as it is both immensely gratuitous and repetitive due to the player feeling like an invincible god of war who cannot be killed.

Despite the repetitive gameplay, fans of the genre still remain loyal to the Warriors series because of the joy of playing through the game with the dozens of characters with unique fighting styles and their unlockables. For example, weapons are found (not bought) and the strongest weapons can only be acquired in the hardest difficulties. In addition, weapons contain special traits at random and the player must acquire several versions of powerful weapons and assimilate them into one powerful weapon. Many of the strongest items can only be collected when certain, difficult, objectives are met as well as unlocking some of the later more powerful (and usually deistic) characters.

To start off, Dynasty Warriors 7 in its entirety has its lore and theme based off Chinese history and mythology. While almost all elements of battles are highly fictional as one man cannot kill twenty soldiers with a swing of a halberd, DW7 stays very true to its historical roots in many minute details like the player inadvertently learning many small details of specific battles such as the names of all the officers who participated, who died in the battle, and why it took place. In fact, Dynasty Warriors 7 took a different route than the other games of its series and put heavy emphasis on story. For example, Guan Yu’s death in the Battle of Fancheng portrays the castle he is defending as on fire and in shambles and the entire stage is spent running away from enemy troops with the stage ending with Guan Yu’s tragic and inevitable death.

The brilliance of Dynasty Warriors 7’s educational value is that its main purpose is not academic. It’s not some thinly veiled attempt of incorporating history into game and doesn’t advertise itself as one either. Therefore, when gamers play this game, they don’t feel like they’re learning history, but intimate details of the characters’ lords and their story. While this game is not and perhaps should not be used as a primary source of education; for anyone studying the “Romance of the Three Kingdoms” or Chinese history during this period, this game will reinforce a lot of historical knowledge by putting students in the environment of what they’re studying. The other great hidden boon of this game is that it gets players excited to learn about the lore of the game they’re playing. When people choose to study of their own initiative, it’s much more effective than forcing it down their throats.