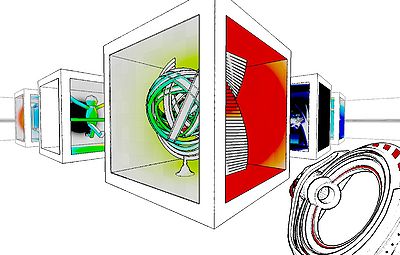 Cubes are colored obstacles that exist around the world that can either hinder or assist the player. At first cubes will be present only as a feature of the world but become a puzzle solving asset with the a cube manipulation gun. This unnamed device comes into the player's possession after completing a few introductory puzzles. The device allows the player to place cubes with the left mouse button and retrieve cubes with the right mouse button. 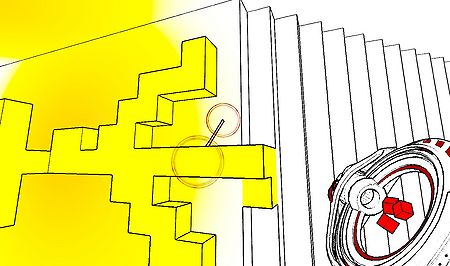 A player utilizing the yellow gun's ability to move cubes.

One of many placards scattered through out the world.

Early game puzzles primarily focus on teaching the player how Antichamber works. Rather than explaining the rules of the world, the player is left to fend for themselves and must discovered the illogical nature of the geometry in the world. Generally this involves leaving the player alone until they stumble across a peculiarity of Antichamber wherein they will find a black placard with an image and text that relates to the discovery. The short piece of text usually embodies philosophical concepts that are experienced in daily life. One such placard shows a picture of two men standing atop a mountain whom gaze up at the moon above. The text reads "No matter how high you climb, there's always more to achieve.” The relevance of this quote comes after the player slowly ascends a tall shaft only to discover another shaft they must once again climb. Through out the game the player will be asked to combine the lessons taught by previous puzzles so that their knowledge is tested. This usually means using combinations of the different colors of the manipulation device as well as understanding how to successfully navigate the unorthodox obstacles and layout of Antichamber.